The Government of India has announced the launch of the Startup India Virtual Hub. The Startup India Hub was inaugurated by Nirmala Sitharaman, Minister of State for Commerce and Industry along with Ramesh Abhishek, Secretary DIPP, and Deepak Bagla, CEO of Invest India and Rajeev Aggarwal, Joint Secretary DIPP.

Startup India Hub was operationalised on April 1, 2016, to resolve queries and provide handholding support to startups. The development of the portal was further announced on January 16, 2017.

For the past one month, the portal has been live in the pilot phase. Over 500 stakeholders have participated in the pilot. Some prominent names include 91springboard, a-IDEA, Aim Smartcity, Amazon Launchpad, Edugild, and more.

Here is a video to grab a quick overview of the Startup Hub platform launch and features:

As stated by Startup India Hub team, “The Hub is the first government website in India to be built on an open API architecture allowing seamless integration of content from Government and private stakeholders across India and the world.”

The platform has been developed with the support of Noida-based digital technology startup To The New, that won the bid as a tech vendor. It has been divided under heads such as Startups, Enablers, and Forum, with easy-to-filter sub-sections to get a quick snapshot of the relevant information.

The Hub attempts to solve the problem of information asymmetry and lack of access to knowledge, tools, and experts, especially in the nascent ecosystem across Tier II and Tier III towns. The Startup India Hub will serve as a one-stop source of collating all the information and connecting the required stakeholders of the ecosystem.

The portal provides regular updates from the startup world with information from over 20 media channels. The platform aims to impart education to aspiring entrepreneurs at a grassroots level and provide a digital infrastructure for applying to all government-related activities.One can also get updates on ongoing government and startup-related events, competitions, plus a discussion forum to get the queries and thoughts sorted on the platform. 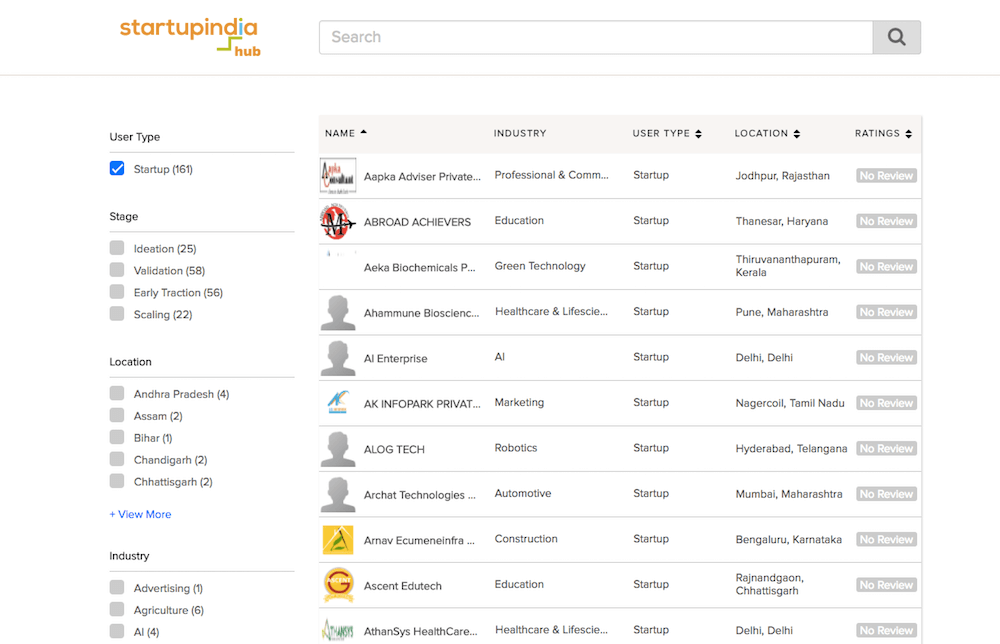 Information for over 60 of the Government related schemes has been placed in a summarised and concise format. This has been done in order to avoid any confusion and improve the readability of the documents. The Startup India Hub team has also introduced an AI chatbot named Sara on the online platform for pilot testing. 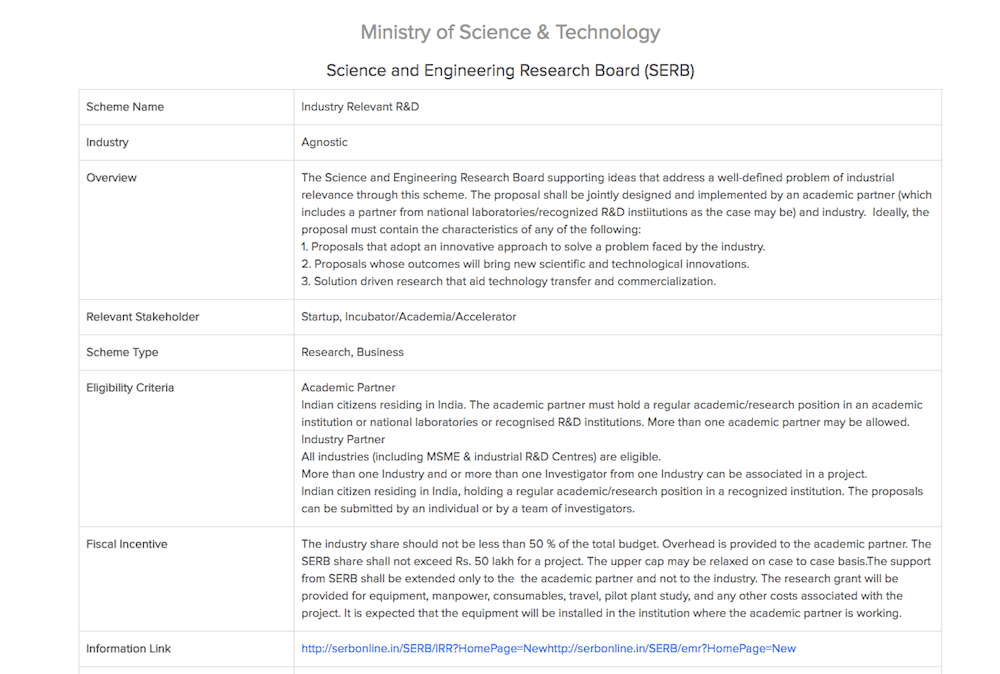 As stated by Aditya Sharma, Manager Startup India Hub, the platform will be managed by a 15 member Startup India Hub team under the direct guidance of the Department of Industrial Technology and Innovation (DIPP). “The platform is more like LinkedIn for the Startup Ecosystem. It not only brings startups and investors together but aims to bring together entire communities, be it startups, incubators or accelerators, to work towards the greater good of the nation, if synergies are met,” he added.

When asked about the efforts made to secure the users’ information on the portal, he said that the majority of the available information is public in nature. The contact information of the registered users is available only if they choose to do so. Also, the database is being managed on the cloud, to avoid server/website breakdowns.

One can also access the platform via apps available on Google Play Store and Apple App Store.

PM Modi launched the Startup India initiative ‘Startup India, Stand Up India’ last year on January 16, 2016the 16th January. The initiative aims to build a strong ecosystem for nurturing innovation and startups in the country. It further aims to drive economic growth and generate large scale employment opportunities in the country.

The launch event of the Hub was kickstarted by a panel discussion on the topic, “Navigating the Startup India Landscape.”. The panel was moderated by Rajat Tandon, President of IVCA and included honourable names such as Srinivas Kollipara of T-Hub, Sairee Chahal of Sheroes, Abhishek Prasad of Reliance GenNext Hub, Geetika Dayal of TiE Delhi, and Arpit Agarwal, Principal at Blume Ventures.

The panel discussion ranged from the selection criterion adopted by the different kind of investors and how one can reach them. Also, the panelists discussed how a platform like Startup India Hub can help in grooming startups in the Tier II/Tier III cities. As stated by Geetika, “Platforms like Startup India Hub will certainly help us reach the remotest corners we have not been able to reach yet.” 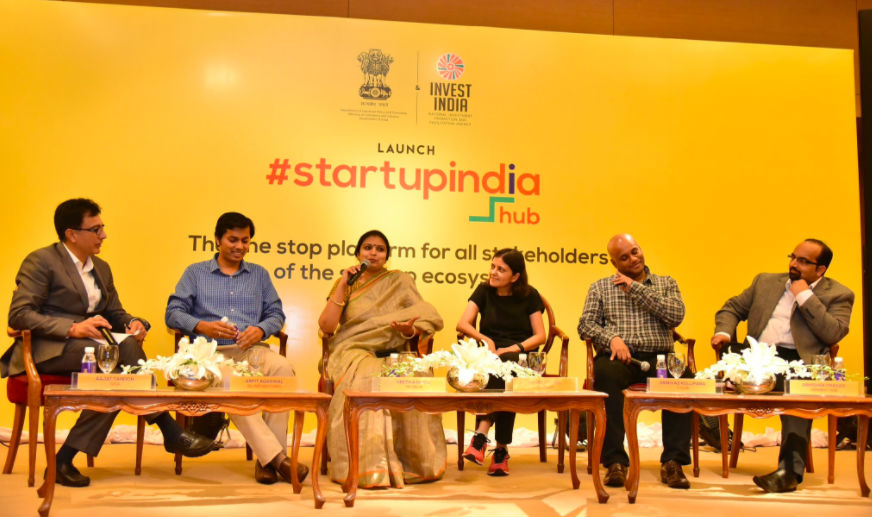 Out of all the applications received, 1,333 have been recognised as startups by the DIPP. 39 Startups have been approved for availing tax benefits by the IMB, as of June 2017.

Along with the homegrown stakeholders, the Startup India Online Hub has also partnered with NYC-based tech incubator Collaborism. As mentioned on the company blog post, “We have already started selecting Top Projects led by Indian makers for The Hub to support, and they are already providing detailed mentorship around angel funding, manufacturing aid, and legal help to the Project team members.” 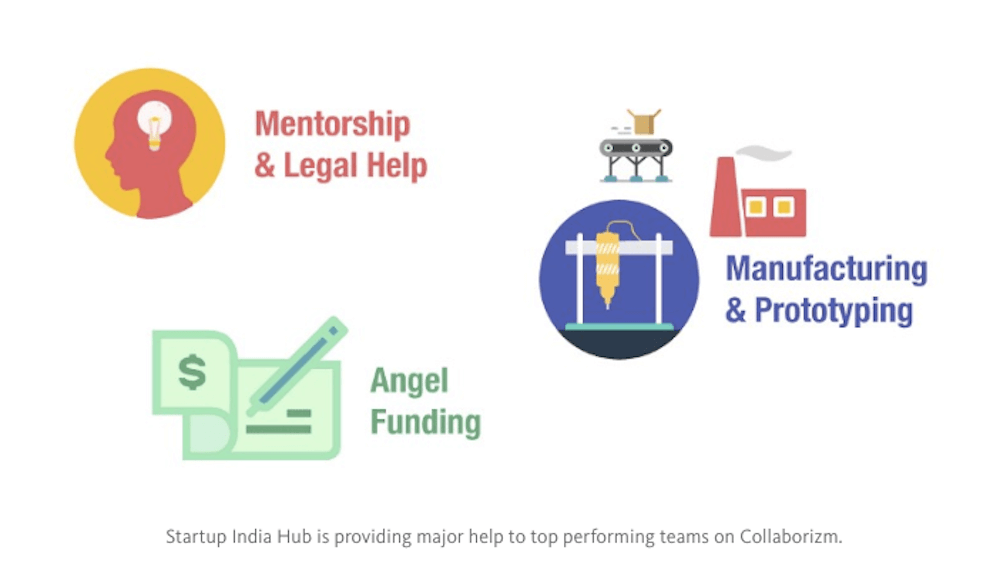 Collaborizm will select one-two promising Indian-led Collaborizm commercial ventures each week and provide The Startup India Hub with a detailed description of these projects, including the kind of assistance they need. The first startup to be selected for The Hub was Sciencotonic, which is a project to teach robotics online using augmented reality.

“This pilot partnership is revolutionary because it enables the Startup India Hub to directly engage and support aspiring Indian entrepreneurs in a scalable, virtual environment. The Hub gets to directly see the positive impact they are having on the aspiring entrepreneurs they are mentoring, and they will also learn first-hand what these talented, motivated young people need to succeed with their ventures,” the blog post added.

Also, the Startup India Hub team is working towards adding regional languages to the platform. As shared by Aditya, several other features are also in line to make the platform a one-stop destination for all startup needs.

As Stated By Nirmala Sitharaman, “The Startup India Virtual Hub Is An Effort To Create A Marketplace Where All The Stakeholders Can Interact, Exchange Knowledge And Help Each Other To Grow. It Will Streamline The Life Cycle Of Existing And Potential Startups, Helping Them Access The Right Resources At The Right Time. From Our Side, We Are Trying To Expedite Critical Things Such As Funds, Meaningful Benefits, And Cutting Down The Time Lag To The Minimum. We Want The Objectives To Be Served In A Speedy Manner And, With Startup Hub, I Think That Objective Will Be Better Served.”

Towards the end of the programme, she also announced to launch a coworking space in Mangaluru as “the people are moving towards Bengaluru which is over-serviced and very expensive for many of them”. She further said, “It might take a month to launch the cowork space but the 60 capacity cowork is already booked.”

Recently, she also infused $183k in a Mangaluru Startup Incubator from the Member of Parliament (MP) fund. She further elaborated on the ongoing discussions with Germany on creating an exchange programme for the startups of both the countries.

In his closing remarks, Joint Secretary Rajiv Aggarwal requested all the members of the ecosystem to register on the hub.